About Lyme Disease In Dogs

Lyme Disease in dogs can cause serious health problems if it's not diagnosed and treated early. Also known as Borreliosis, this disease is carried and transmitted by ticks. Although more prevalent in the north-east part of the USA it can, and does, occur in any part of the country.

Here's what you need to know about Lyme Disease and your dog: 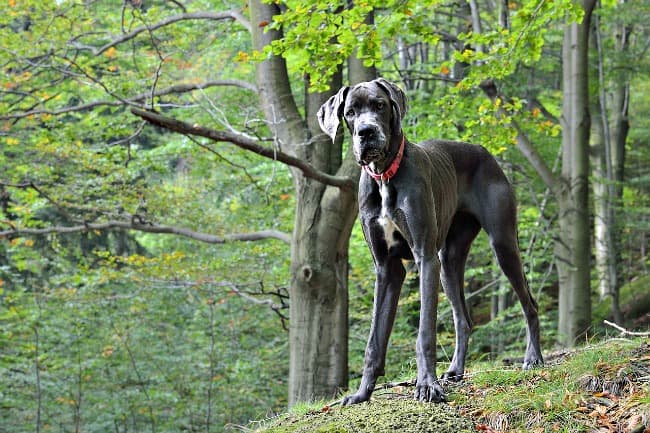 How Does a Dog Get Lyme Disease?

Lyme Disease is a vector-born disease, which means it is an infection disease which is transmitted by another living organism, in this case the teeny-weeny Deer Tick.

Deer Ticks (aka Black Legged Ticks) primary host are deer, but these little critters aren't picky, and if your dog happens to wander through long grass or wooded areas, then they will happily 'jump aboard'.

Lyme Disease isn't 'contagious' and you can't catch it from your dog, however if an infected Deer Tick bites you then you can be infected in exactly the same way.

This disease can occur in almost any part of the US. Recent studies show Lyme Disease carrying ticks in 37 states and Lyme Disease cases in humans has tripled in the last 20 years.

Although ticks are generally associated with rural areas, long grass and wooded land, they are common in suburbs, city parks and even urban areas because they're brought in by wildlife who are often attracted to easy pickings of food in populated areas. 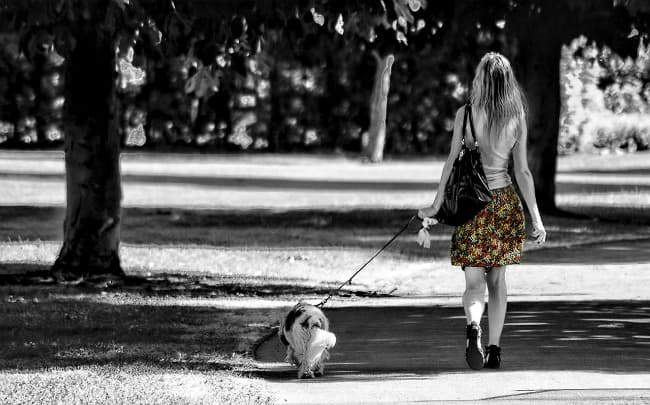 The states where Lyme disease is most prevalent include:

Forewarned is forearmed, so I love these handy parasite forecast maps which give you an at-a-glance understanding of the current risk of several different parasitic diseases across the USA

Not all dogs who are bitten by infected ticks will get sick, and not all deer ticks are carrying Lyme Disease. Studies have shown that a large percentage of dogs already have some immunity, but there's no way for you to tell by looking whether or not your dog is at risk.

It's best to follow tick prevention measures, and also treat any tick found on your dog as a potential threat (there are also other tick-borne diseases such as Rocky Mountain Spotted Fever, Ehrlichiosis and others to be concerned about).

Deer ticks are small, usually between 2 to 3.5 mm, and a fully grown adult is no bigger than a sesame seed. When it is sucking blood however, it grows considerably in size and is easier to see.

In order to transmit the bacteria which causes Lyme Disease in dogs, the tick needs to be attached for somewhere between 18 and 48 hours (researchers/experts cannot agree on a more specific time-frame at this point).

After this period, the bacteria can be transferred to Fido's bloodstream through the tick's saliva. 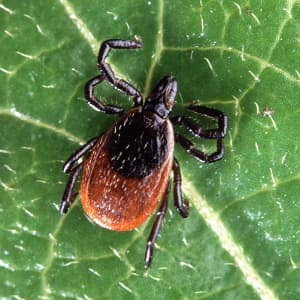 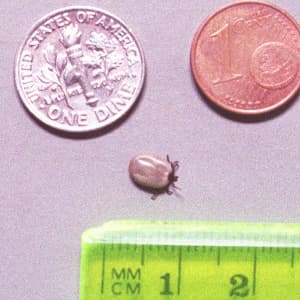 The images above show and adult deer tick before and after it has been gorging on a host animal's blood. See how the body has completely changed in shape? Nasty!

Symptoms Of Lyme Disease In Dogs

It's important to know that the symptoms of canine Lyme Disease usually appear somewhere between 2 and 5 months after the dog was infected. Occasionally they can appear sooner (in as little as a few weeks) or sometimes even later, possibly up to a year or longer after exposure.

Signs that MIGHT indicate your dog has Lyme disease include:

If Lyme disease goes unnoticed and untreated serious complications can occur, these include:

In dogs, you are very unlikely to see that classic 'bullseye rash' as a tell-tale sign of Lyme Disease. If the tick bite was on a relatively hair-free area of your dog (ie his belly, inner hind leg etc.), then you may see a red, bullseye type rash around the bite itself, but most likely not.

If your dog has picked up a tick you need to remove it as quickly as possible. Getting it off him within 24 hours can really reduce the chances of it being able to transmit Lyme, or any other diseases.

how to remove a tick

Here are some important tips to help you make removing a tick from your dog as simple, and safe, as possible:

Treatment for Lyme disease in dogs is usually very effective, if the illness is recognized early enough. 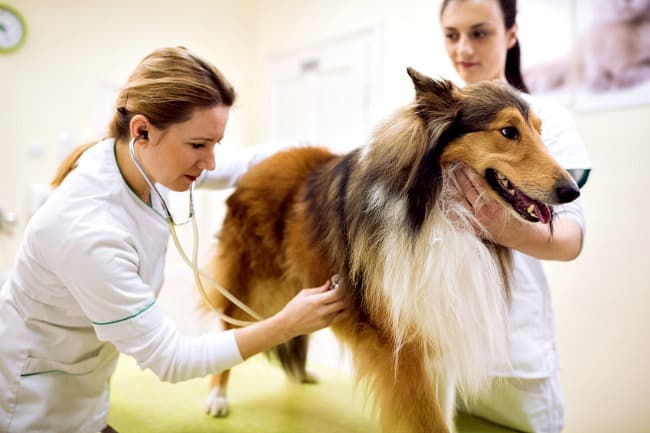 Symptoms can progress very quickly, so getting help as soon as you realize something isn't quite right is hugely important. Of course, this applies to all diseases and conditions, the earlier you get an evaluation and treatment plan in place, the faster your dog will recover.

Blood can't be tested for Lyme until three to five weeks after a suspicious tick bite, as it takes that long for antibodies to be produced and show up in the blood stream.

The most commonly used antibiotics used for treating Lyme Disease in dogs is Doxycycline. Other antibiotics including Amoxicillin may also be used. Sometimes anti-inflammatory medications are also given to reduce swelling and discomfort.

Antibiotic treatment is usually given for at least three weeks, often four. Prompt diagnosis and treatment gives your dog the best chance of making a full recovery but Lyme disease can be tricky and symptoms can improve, and then worsen over time. However correct antibiotic treatment significantly reduces your dog's chances of developing severe or chronic lyme-related issues later on.

Symptoms generally improve quickly once antibiotics are started. If you don't see a noticeable change in your dog within 3 - 5 days, take him back to your veterinarian for another evaluation. He may need a different medication or an additional one.

The earlier the antibiotics are started, the better the chance that your dog will make a full recovery. As always, it's important to finish the entire course of antibiotics because if they're stopped too early, symptoms may come back (along with the risk of the long-term damage).

Early detection is so important with Lyme Disease in dogs, and yet blood tests aren't going to be use until around a month after the possible infection. That's worrying! But if you remove the tick yourself there's a fantastic product which can give you priceless peace of mind:

Testing is done by the Northeast Wildlife DNA Lab in Pennsylvania.

As symptoms don't show for weeks, this early warning can allow you to set up treatment much earlier than would otherwise be possible, saving a lot of discomfort, pain, distress and cost.

This lyme disease tick test works just as well for ticks who bite humans as it does for those who bite our dogs. I keep one in my mudroom closet, just in case any of our family members get 'ticked'. 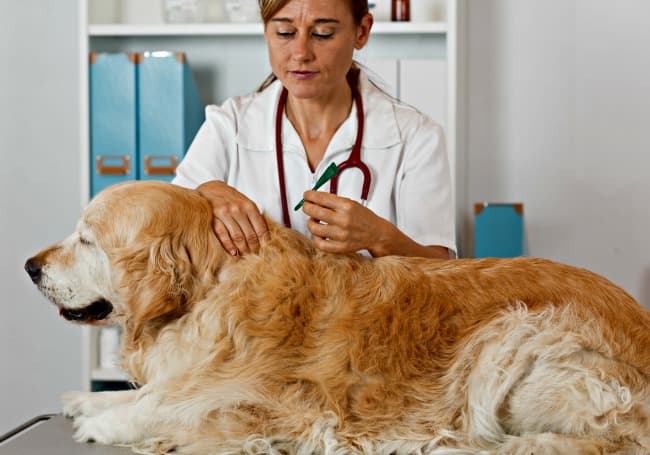 Using an effective tick preventative on a regular basis will protect your dog by ensuring that any ticks which climb onto him will die within the 24 hour 'window' before infection sets in.

Over the counter products can't be relied on and it's important to choose a product that contains Permethrin, Fipronil or Amitraz.

Revolution is not an effective treatment against Lyme Disease in dogs as it only kills the American Dog Tick, NOT the Deer Ticks who carry the disease.

Advantage is also ineffective as protection because it only kills fleas!

Some collars such as the Preventic Tick Collar or a Seresto Tick Collar can also be used, but as these may not be as effective as the topical treatments.

It's a good idea to use them as extra protection if ticks are really bad in your area, or if your dog spends a lot of time out hunting/walking in long grass or wooded areas. A Preventic collar can be used at the same time as the topical treatments, and is effective for up to 3 months.

If you live in an area where Lyme Disease is prevalent, you may want to consider having your pup vaccinated against it. Although not 100% effective (no vaccine is!), it's still the best way to protect a high-risk dog.

Finally, here's a great tip that can reduce the chances of your dog getting bitten by a tick, or bringing one home to the family...

Carrying a sticky lint roller (the type with tear-off sheets) in your car, or in your coat/bag etc. when you're out and about in areas where ticks are likely to be is a great first-line of defense.

When you're finished your walk and getting into the car, or have left the area of long-grass/woods etc. simply run the sticky roller over your clothes and shoes, and brush over your dog's body.

It will pick up ticks which aren't yet attached to skin or are on the surface of clothing or fur. Obviously a more thorough examination is needed too, but this is a quick and easy way to start de-ticking yourselves! 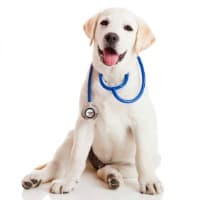 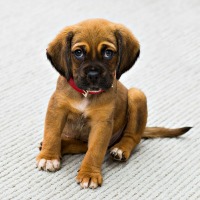 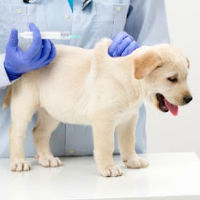