Coccidiosis in dogs is caused by tiny intestinal parasites.

It can cause serious health problems for puppies and some dogs, while others can contract it without any ill effects.

Coccidia parasites aren't worms, they're actually tiny, single-cell organisms that are too small to be seen by the naked eye.

Coccidiosis is most dangerous to young puppies whose immune systems are weak due to another illness, poor overall health, unsanitary environment or stress.

This is why it's often seen in pups who have recently left their momma and siblings and come into a new home. 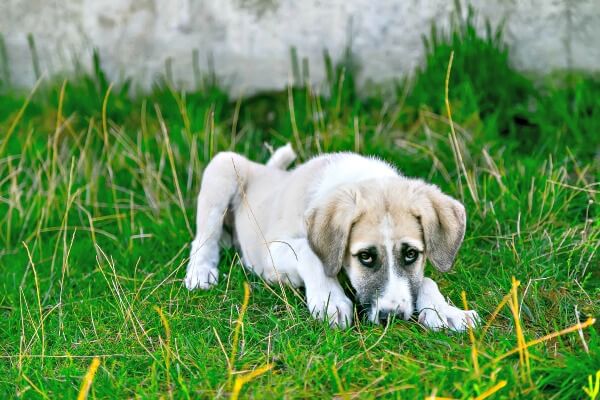 The stress of all the changes in their lives, perhaps combined with the exposure to other bacteria, parasites or infections, weakens their immune systems and allows the Coccidia organisms to grow, flourish and make the little Fido or Fifi sick.

About Coccidiosis in Dogs

There are several different species of coccidia which are found in dogs, cats, rabbits, rodents and more. 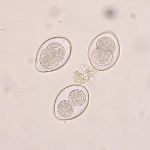 Even humans can get a form of this disease (but luckily the type of coccidia your puppy might get isn't transferable to humans).

The most common species of Coccidia in dogs are called Isospora Canis.

Many dogs and puppies have these organisms in their digestive tract, but that doesn't necessarily mean that they're going to get sick.

They're basically 'carriers' for this disease but don't show any symptoms because they have strong immune systems which keep the parasite levels under control.

Your pup might get sick because his immune response takes a nose-dive due to stress, or some other illness, or he might 'catch' Coccidiosis from another infected dog or animal.

Ttiny, immature Coccidia organisms, known as Oocysts, are excreted from your puppy/dog in his feces, and are then absorbed into the soil, where they're hardy enough to live there for extended periods.

If Fido eats either the infected stools, or the soil around/under them, he's likely to get sick.

The incubation period (time between your pup being exposed to the disease and his symptoms appearing) is about two weeks.

Coccidiosis is most often seen in puppies who are less than 6 months old, and usually within about 3 weeks of a major stressful experience or illness.

It's less common in adults who have already built up immunity to it over time.

If an adult dog is infected with coccidia, it's often because he already has a weakened immune system due to another illness or health condition.


Symptoms Of Coccidia Infection In Dogs

Some puppies and dogs can have Coccidia without ever showing any symptoms, or being unwell.

They're what is called 'asymptomatic', and are silent carriers of the disease, able to infect others without suffering from any ill-effects themselves.

Adult dogs who have been infected before are likely to be immune to that particular strain of coccidiosis afterwards, even if they didn't show symptoms of the illness at the time. 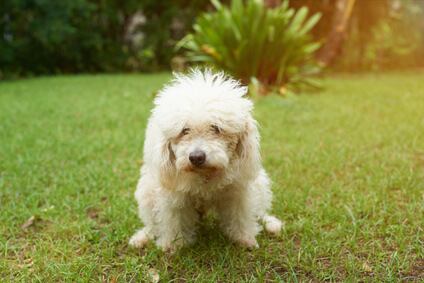 But, young puppies with Coccidiare likely to be pretty sick, as are some adult or older dogs.

Symptoms of Coccidiosis in dogs include:

If Fido has coccidiosis, the symptom you're most likely to notice first is the diarrhea.

This diarrhea may be mild, moderate or severe depending on what stage the disease is at and occasionally, in some puppies, a few episodes of mild diarrhea may be all that happens as the little guy's immune system overcomes the infection.

But in most cases, the diarrhea will get worse pretty quickly and become watery and often bloody as well. Lethargy, loss of appetite, vomiting and weight loss will follow.

When he's having diarrhea and/or vomiting and not drinking LOTS of water your pup will get dehydrated quickly, and this is dangerous in itself.

These symptoms are almost exactly the same as the symptoms of Parvovirus which is another extremely contagious and dangerous, often fatal, illness and it can be difficult for even an experienced dog owner to tell the difference between them.

But all you need to know is that BOTH these diseases are potentially fatal to your puppy.

Any pup who has repeated watery diarrhea, with or without other serious symptoms, needs to be seen by a veterinarian right away.

Coccidiosis can be fatal if left untreated, especially in very young, sick or immuno-compromised pups and dogs.

Coccidiosis can be diagnosed by your veterinarian by examining a sample of your puppy's stool under a microscope. This is called a 'fecal flotation'.

Early on in the infection it's possible to get a 'negative' result from a fecal sample because there haven't been enough coccidia protozoa eggs shed as yet.

Even at later stages a single fecal sample won't always contain Oocysts, so it may take a couple, or even several, more tests, done over a period of a few days, to make an accurate diagnosis. 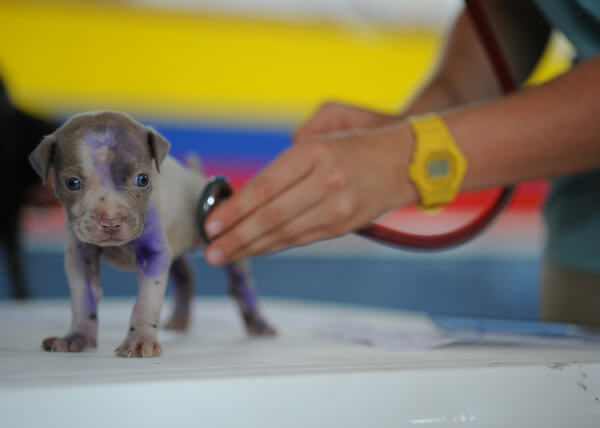 It's also possible for your veterinarian to make a positive diagnosis of coccidiosis by analyzing a blood sample.

Generally the best way is to combine the fecal test results with the presence of other symptoms to make a positive diagnosis, but only your vet can do this.

Once coccidiosis  has been diagnosed, your puppy or dog will most likely be prescribed a sulfa-based antibiotic such as Albon or Tribissen.

These medications don't actually kill the coccidia protozoa, but stop them from breeding and reproducing, eventually removing all organisms over time.

Because of the way they work, these antibiotics may need to be taken for a two weeks or so to be effective, and sometimes more than one course of treatment is needed.

Albon can also sometimes initially be given by injection, then followed up orally.

If your puppy's Coccidiosis is severe, sometimes additional supportive veterinary care is needed, and this might include IV fluids and even hospitalization for a few days.

(Note: sulfa based medications aren't recommended for use on dogs who are pregnant as they can cause birth defects in the puppies.)

There are also some natural dog remedies that can help to soothe your dogs digestive tract and re-balance bacteria and reduce inflammation.

Used in conjunction with the treatment prescribed by your vet they can help speed up recovery and get your pup feeling better, faster.

Here are a couple of natural products for treating Coccidiosis in dogs:

Only Natural Pet Probiotic Blend for Dogs and Cats A gentle formula that helps restore the balance of microbes in your pets' digestive tract. Provides "friendly" bacteria to help minimize inflammatory responses and other GI distress symptoms.

Only Natural Pet GI Support for Dogs and Cats This soothing product aids digestion, and is especially good for dogs suffering from dog food allergies or sensitivities. Helps reduce symptoms that accompany many canine digestive disorders such as vomiting, diarrhea, constipation and more.

NOTE: Do remember to let your vet know about any natural or over-the-counter products you are giving your dog though. He/she needs to have the complete picture in order to give your puppy the best possible care.

Because coccidiosis in dogs is spread through feces, high standards of hygiene are very important.

Picking up Fido's stools right away, keeping flies/insects and rodents at bay (they can also spread this disease on their feet/in their bodies) and cleaning all areas where your puppy or dog has eliminated thoroughly are vital.

Coccidia organisms are very hardy, can survive for long periods in the soil, and are difficult to kill - most household cleaners aren't going to be effective.

Cleaning at high temperatures (ie steam cleaning and sterilization with boiling water) is the best option for utensils and toys (ie bowls, chew toys etc.). Wash bedding on the 'HOT' cycle in your washing machine with bleach.

For kennel areas, floors, concrete etc., washing thoroughly with a 10% ammonia solution is the best and most effective way to keep everything sanitary. You can also use a 1:16 solution of bleach:water.

Whichever solution you choose, wash all areas thoroughly and leave to soak in for at least 20 mins before rinsing. Grassy areas or soil/dirt can be very difficult in terms of removing all traces of coccidia protozoa.

The best thing to do is to soak the area with either of the above cleaning solutions. However, these surfaces can remain contaminated for up to 2 months or more, so bear that in mind.

Most puppies and dogs who survive this illness develop a certain amount of immunity and will usually not catch the same strain of coccidiosis again.

But, this isn't always the case so it's still important to make sure you've sanitized your home/yard very carefully.

Isospora Canis, which is the most common strain of Coccidiosis in dogs, can't be transmitted to humans and doesn't cause any symptoms in those exposed to it.

But, there are other types of Coccidiosis which can be found in dogs and cats that are able to transmitted to people, making them sick.

As with dogs, the people most at risk of severe health problems being caused by coccidia are those with weakened immune systems, young children/babies and seniors.

Symptoms of Coccidiosis in humans include:

If anyone in your family shows these symptoms and your dog/puppy is also sick, or has been diagnosed with Coccidia, a visit to the doctor is needed for treatment. 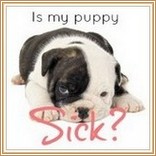 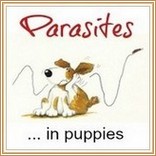 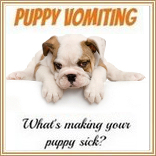 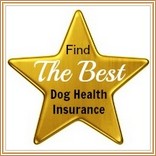